You can help keep our Inspectors on the road.

As a charity, we rely heavily on the kindness from supporters to keep us going.

Most days here at the Animal Welfare League NSW start out like any other. Calls for assistance inundate our phone lines and the reports of cruelty concerns keep our Inspectors busy. But some calls are harder than others, like the one that came through about Gerald the Pony.

A caring person had called us with a cruelty concern. Their shaky, unsteady voice explained the situation of a pony who was reported to have a poor body condition and overgrown hooves. Due to the nature of the call, it was a matter of urgency that an Inspector attend the property to check on the pony immediately.

AWL NSW Inspector Rowe knew that this pony’s day would be numbered and rushed to the property in Prospect, Western Sydney. Upon arrival, Inspector Rowe discovered a dark brown pony alone in a paddock. This pony had no access to water – not a drip in sight… just two empty buckets.

“On arrival, I approached the male pony who attempted to walk freely; unfortunately, the male pony exhibited signs of severe pain with every step he took. It was heartbreaking, he was clearly in agony.” – Inspector Rowe.

It was evident that this pony wasn’t in a good way and Inspector Rowe made the decision to seize Gerald into our care. Gerald’s owner was present at the time of the seizure.

Inspector Rowe commenced investigations into this matter immediately due to the amount of pain Gerald was experiencing just from trying to move. His hooves were riddled with pus-filled abscesses, severely impacting Gerald’s quality of life.

Gerald needed urgent medical care, and an equine specialist veterinarian in Camden was contacted. Gerald was then transported to AWL NSW where he received a further two months of intensive treatment to his hooves. After an assessment, equine specialists concluded that Gerald had likely been in this horrific condition for approximately 18 months. 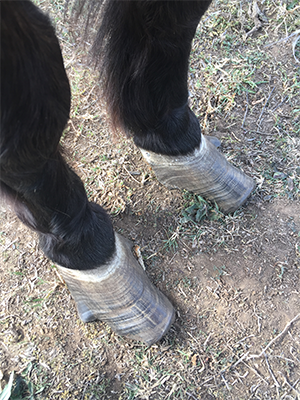 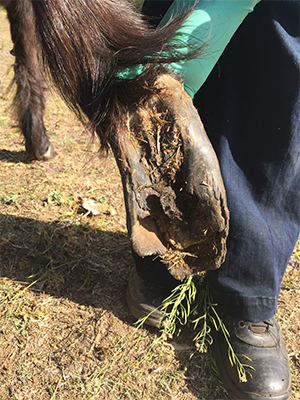 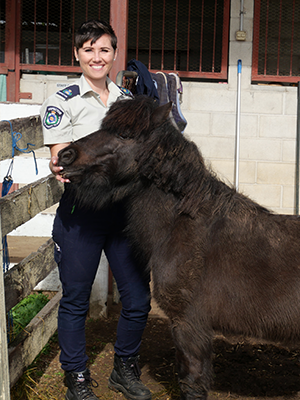 Gerald’s story does not end here.
Twelve months on from that first call, Gerald’s road to recovery is far from over.
Gerald has been diagnosed with a lifelong condition called Laminitis, believed to have been caused by the type of food Gerald was consuming. This condition caused the tissue in his hooves to inflame, resulting in his pain and lameness. This condition will require continuous management for the rest of his life.

Gerald has been diagnosed with a lifelong condition called Laminitis, believed to have been caused by the type of food Gerald was consuming. This condition caused the tissue in his hooves to inflame, resulting in his pain and lameness. This condition will require continuous management for the rest of his life.

AWL NSW was able to take legal action against Gerald’s owner, and the matter was heard in Blacktown Court on the 10th January 2019. His owner pleaded not guilty to being in charge of an animal and failure to provide veterinary treatment.

On the 17th May 2019, after a second hearing, the owner was found guilty and agreed to enter into a conditional release without conviction for 12 months on the condition she will not commit any further offences. The defendant was ordered to pay AWL NSW professional fees to the sum of $2,500 and veterinary costs of $2,575.

Please consider making a small donation to support the vital work of our Inspectors. It can be costly to help rescue animals from neglect, but with your support, we can continue to respond to cruelty cases just like Gerald’s.

Online donations can be made here or call AWL NSW on 02 8777 4461 to make a donation over the phone. All donations over $2 are tax-deductible.

If you can, please consider a donation, no matter how small.
Every dollar helps our Inspectors continue to save lives like Gerald.