The cat that beat the odds… 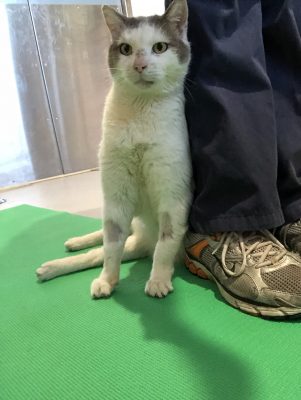 On the 10th September 2018, a frail injured cat was brought into the AWL NSW vet clinic at Kemps Creek. This poor male cat was paralysed in both of his back legs, with little voluntary movement in the right hindlimb and none in the left hindlimb. His tail dragging behind him.

Clearly in pain, the injured stray was scared on arrival and his future looked bleak. With no microchip available, the cat was named Xavier and triaged immediately into our care by AWL NSW Senior Veterinarian Dr Deshaylia Moodley.

Our veterinary team had initial concerns about possible blood clots to hindlimb or tumour which could mean he would never recover. Another possibility was a disc prolapse in the spine which, with Xavier’s signs, carried a fairly good prognosis.

Due to his paralysis, Xavier could not urinate without assistance from vet staff. After a week in care, Xavier was able to urinate by himself and had shown dramatic improvements in his movement. These improvements lead our vet team to believe that his paralysis was most likely to be caused by a disc prolapse.

After a short time of receiving supportive care (pain relief and nursing to empty his bladder), Xavier started to make progressively small improvements (more voluntary movement in his left as well as his right hind limb) and an intensive physio plan was started by our vet nursing team.

Xavier was moved from intensive care to the vets’ office to start his physio plan. This plan would help Xavier build much-needed muscle on his back legs. It was here that the vet team saw his inquisitive nature and smoochy personality come out, and it wasn’t long before the entire clinic team fell in love with him

Xavier was doing well and it wasn’t long before this gorgeous cat was able to leave the vet clinic and continue his physio in a foster home. Dr Suzanne Ravenscroft became fond of this affectionate cat and volunteered to foster Xavier and help him with his physio. It wasn’t long before Xavier made himself right at home and after a couple of months, he improved to the point that Suzanne even found him up on the kitchen counter!

In his foster home, Xavier became incredibly playful and started to try and run after toys (and even pieces of litter!), sometimes forgetting his back legs were still recovering – causing him to ‘ice skate’ across the floor.

This sweet and cuddly boy would often find himself in the lap of Suzanne, always wanting to be near her and bunting her affectionately. He would try and stumble across the room to try and follow Suzanne wherever she went – he loves the company of people!

Feeling better, Xavier was taken back to the AWL NSW vet clinic for a dental to remove some loose teeth. It was here where sweet Xavier was started to itch. He was given flea treatment and a short course of steroids which improved his skin – however, Xavier became itchy again when this treatment stopped. Xavier went back into foster care for a hypoallergenic food trial. While poor Xavier improved again in foster care, however, the food trial was not successful, leading the AWL NSW vet team to believe that his allergy was caused by something environmental.

Xavier’s skin allergy is much better but it is likely that Xavier will never be 100% with his back legs, however, he is able to move around independently and will live a wonderful life with his new family that adopted him on Saturday 7th September 2019.

« Meet our CEO
The Good Crowd »