On 22nd April 1958, a group of prominent animal lovers attended the first ever meeting of Animal Welfare League NSW, with bright hopes of advocating on behalf of animals across the state.

The organisation was led primarily by Mr WR Lawrence MLA, who had resigned from his post as President of the RSPCA just weeks prior, and started Animal Welfare League NSW as a breakaway group.

Mr Lawrence (who was also a Parliamentarian and a former Deputy Police Commissioner) left his post at the RSPCA in quite a dramatic incident that was well-covered by the newspapers in 1958.

Upset by the use of gas chambers for euthanasing dogs at the RSPCA’s Moore Park Shelter, Mr Lawrence quit and took numerous other members and two Inspectors with him.

Some of his peers on the RSPCA Council who shared his views were so disgusted by the gas chambers that they destroyed them with a sledge hammer before leaving the organisation – an action that shocked many members.

The core focus of the AWL NSW in its infancy was investigating animal cruelty, although League advertisements from the 1950s also had a strong anti-euthanasia bent.

In its first year, the fledgling organisation faced many hurdles – it was denied an annual grant by the NSW government, and could not access tax or stamp duty requirements, with many politicians questioning the need for two societies devoted to animals in the state.

However there were some successes to celebrate, with 300 members and 1,245 pounds banked after twelve months. Animal Welfare League NSW finally received its first government grant of 500 pounds in 1960 – quite a significant amount of money for the time.

Inspector Mole and his colleagues investigated tips relating to all types of animals. An early case includes prosecution for a Paddy’s Market dealer who kept 62 chickens in an overcrowded crate, leading to a fine for 7 pounds.

In a 1959 article that is eerily reminiscent of recent headlines, Animal Welfare League NSW successfully prosecuted two greyhound trainers for using a live rabbit as a lure bait. The trainers were fined 5 pounds each. 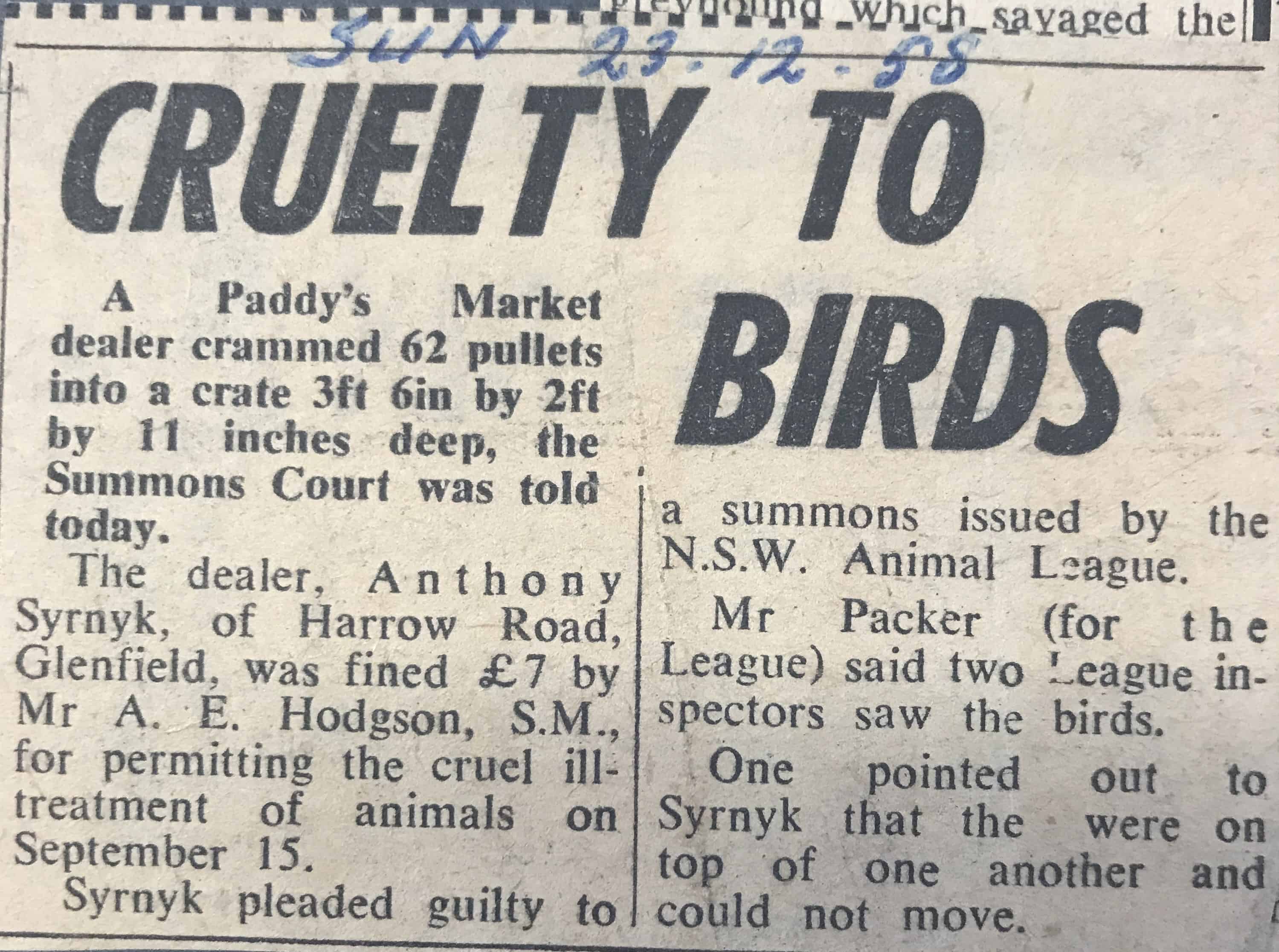 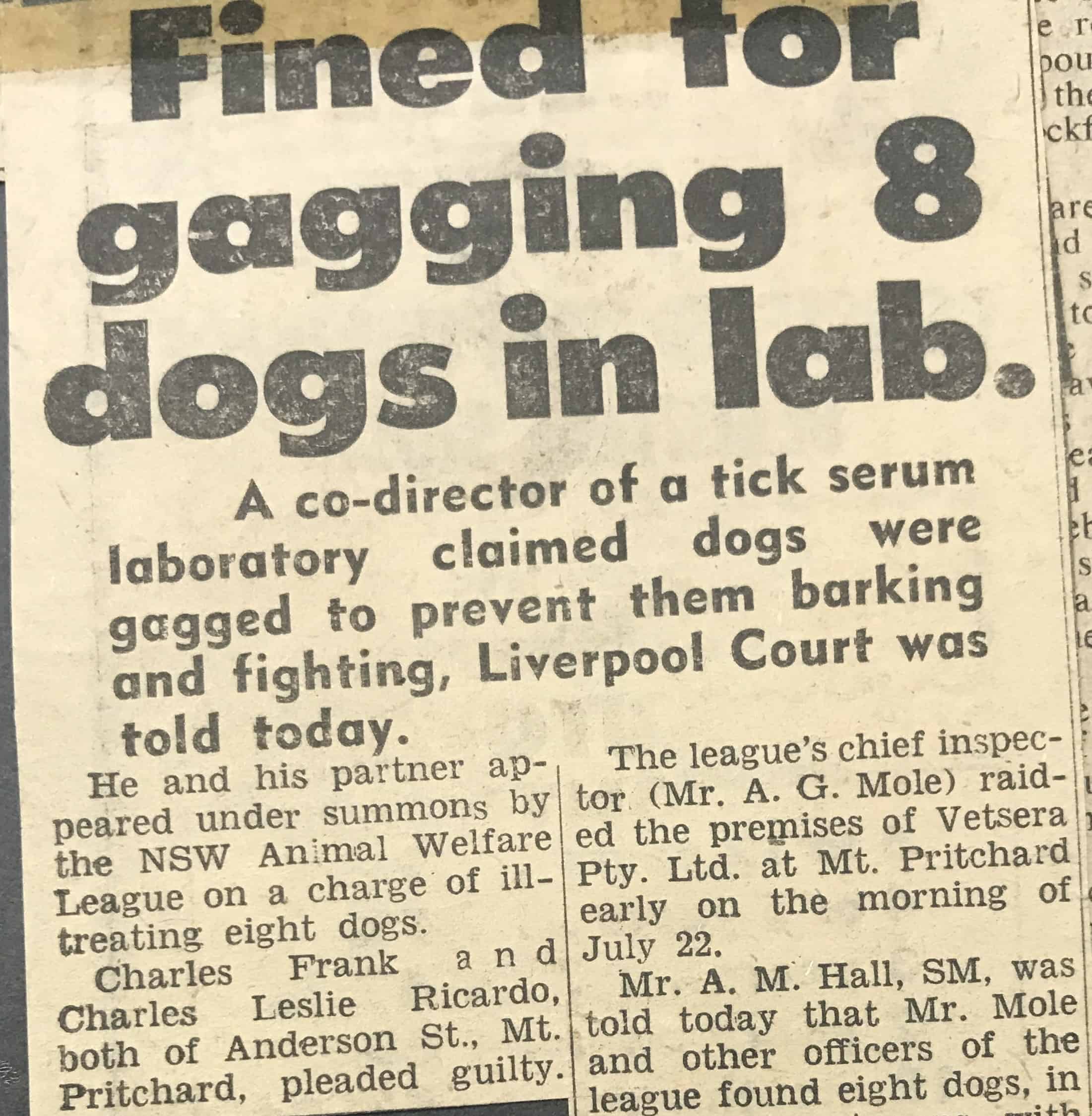 A series of news articles from the late 1950s covering successful proseuctions led by Inspector Mole, who was one of the pioneer Inspectors of Animal Welfare League NSW

While the Inspectorate was flourishing, fundraising was starting to pick up too, with a Ladies Auxiliary supporting Animal Welfare League NSW in the city, holding stalls at Central and Wynyard stations to raise awareness.

The branches were also developing, with the first ever AWL NSW branch formed in Armidale in 1963, followed by Northside (in northern Sydney) in 1963.

Over the years, there were numerous attempts at finding a property suitable for an Animal Care Centre that would allow Animal Welfare League NSW to expand its rehoming efforts.

After many false starts, including a temporary shelter in Turramurra in 1980, Animal Welfare League NSW purchased the ‘Oleander Park’ boarding kennels in West Hoxton. The site was fitted out with a cattery, vet clinic, stables, and housing for birds and pocket pets.

A shelter was also purchased in the Ingleside area, however was regrettably vacated in 2017 due to serious issues with the on-site wastewater system.

The organisation’s current main shelter, located in Kemps Creek, was completed in 2008 and was renovated with a new dog walking track and veterinary isolation unit. The shelter welcomes thousands of animals through its doors every year, for quality care prior to rehoming.

True to its roots, Animal Welfare League NSW has also maintained its Inspectorate department, and the branch system remains strong with various branches around the state.

We remember the principles that Animal Welfare League NSW was first founded upon, and would like to thank the public for their support over the years, as we journey towards making New South Wales a kinder place for all animals.

The incredible transformation of Milko »